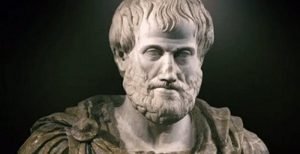 One of the areas I explore in my efforts to find impactful solutions to modern problems is in the realm that I refer to as "The Wisdom of our Ancestors."
I don't like reinventing the wheel and I love shortening my, and others', learning curves.
It's a fact that people in every generation going back thousands of years face very similar challenges over and over and over again. While the specific details change based upon the times at a macro level the basic challenges remain the same.
It's also a fact that there have been millions of women and men who, over the decades, centuries and even millennia have learned how to use their intelligence, creativity and industriousness to solve many of those problems in their time. Some of them have also documented them.
Aristotle was one of those folks.
In this edition of the Conscious Leadership Conversation, I want to share the basics of one of his processes, the Aristotle Model, for solving complex problems which I have used with much success in my role as a leadership and organizational performance consultant and specifically in my role as a leadership coach.

The questions that makes the Aristotle Model powerful

A frequently used approach to solving a complex problem is to begin by asking 4 basic questions.

The 4 questions typically are:

How did it happen? i.e. What are the details of the incident?

What needs to be done to fix it? – i.e. What are the steps needed to effectively respond?

Why did it happen? –  i.e. What conditions allowed or caused it to happen?

Who needs to fix it? – i.e. Who do we need to assemble in order to resolve the issue?

Who does it impact and who can help resolve it?

Why is it important to fix?

What is the root cause of the problem?

How do we effectively resolve the issue?

The following unpacks his model:

1. WHO does the problem impact and who can help resolve it? This speaks to the vital importance of both identifying and engaging those people most affected by the problem that occurred and those who are empowered to resolve it.

Often the same people are important to and involved in both sides of this question because who better to clearly define and describe the impact of a situation gone sideways AND to provide workable solutions than the people directly impacted? But it is also important to have empowered managers who can bring a big picture viewpoint to the discussion.

2. WHY is it important to fix? The Aristotle Model asks this question because not every problem needs to be fixed. This is especially true if there is little risk of the problem re-occurring or if the cost to fix it – in time, resources and/or money – exceeds the benefits of solving it.

Not all problems are created equal. It is important to assess and differentiate between gnats that irritate and bombs that detonate.

When exploring the WHY you also want to take into consideration the cost on morale, employee engagement and stress levels the problems are causing.

So, if you have the right WHO’s in the room and you facilitate a thoughtful impact vs cost assessment, the answers to this question will become clear.

3. WHAT is the root cause of the problem? One of the most effective and easy to understand ways to begin getting to the root cause of a problem is to use the “5 Why” process of Root Cause Analysis. Briefly, the basic concept is to ask the question “Why” 5 times on the way to finding the root cause culprit. Sometimes it may be necessary to ask more than 5 Whys and sometimes you may uncover the cause sooner. Each situation is different.

See the image below for an example: 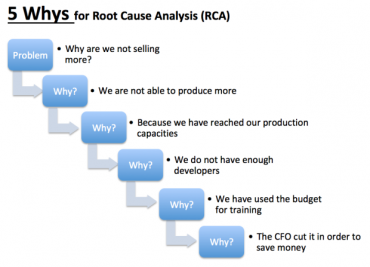 In this scenario, the solution that will solve the problem is for the CFO to re-institute funding for developers. However, if that is not possible you must ask more WHY’s. At some point you will get to a point where a decision based upon company priorities will have to be made. Then you make your decision, which can often be a Sophie's Choice. But you make it an move forward as a cohesive team.

4. HOW do we effectively resolve the issue? The last step in the Aristotle Model is where the work you have put in to this point pays very big dividends.

You have assembled the right people. You have collectively, thoughtfully considered whether the “cost of the problem” justifies the time, effort and resources necessary to address it. (As leaders we must always look for the ROI on the deployment of our limited human and financial capital resources.)

And most important, is that you have collectively found and aligned upon both the root cause of the problem and the solution(s) to be implemented. You now can effectively focus your efforts with confidence and precision on the specific steps to be taken, by whom and when.

You facilitate this final step following the same process you have been using up to this point. Simply convene the collective genius, resources and energies of your team and leverage all of it to define what success means; the action items, roles, responsibilities and timelines that must be will deliver that success AND you must define the communication matrix needed to insure information, updates, complexities and issues are communicated regularly and effectively.

In other words: what will be reported on; how often; to whom by whom and using what format(s) i.e. face to face meetings, email reports, conference calls, video conferencing etc.

COMMUNICATION IS THE LUBRICATION THAT KEEPS PROJECTS MOVING IN LINE AND ON TIME.

Then everyone grabs an oar; assumes their role and responsibilities and they get after it.

CONCLUSION: With the Aristotle Model leaders and managers can learn, implement, and then teach their organizations to become proficient at solving complex problems effectively and expeditiously are leaders who will always be in great demand and of great value.

If you would like to learn more about how to implement this process contact me to discuss a detailed training program that will give you the tools to immediately begin benefiting from Aristotle’s wisdom.

Sign up now for your FREE 3-week trial of Jeffrey’s Conscious Leadership in Action self-study program!

Based upon the national and international award-winning book: Developing the Conscious Leadership Mindset for the 21st Century. This program guides you through a deep journey of self-discovery and personal development that transforms your impact as a leader.